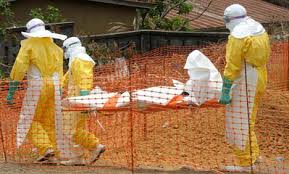 Wife of late Dr Iyke Samuel Enemuo who died of Ebola disease in Port Harcourt has been moved to the quarantine centre in Lagos.

Rivers State Commissioner for Health, Dr Sampson Parker who disclosed this yesterday at a briefing in Port Harcourt, gave the name of the Nigerian Diplomat working with the Economic Community of West Africa States, ECOWAS, who was treated by late Dr Enemuo in Port Harcourt as Olu Ibikunle Koye.

This is coming amid fears that the dreaded Ebola disease may have spread further than anticipated because the body of the late Dr Enemuo is still at the University of Port Harcourt Teaching Hospital mortuary.

Parker said the late Dr Enemuo was aware of the Ebola status of Ibikunle before treating him, adding that after the patient went back to Lagos the late doctor poured bleach in the hotel room where the patient stayed and received treatment.

“ The patient had received the late Dr. Patrick Sawyer in Lagos. Upon developing the symptom confided in a female colleague, called Lillian, who contacted the late Dr. Enemuo. It was after contact was established with Dr. Enemuo that Olu Ibikunle Koye flew to Port Harcourt to see Dr. Enemuo”, he said.

The Commissioner said the Diplomat who escaped from a quarantine centre in Lagos sneaked into a hotel, Mandate Gardens in Rumuokoro area of the state and also switched off his phones to evade arrest.

The late Dr Enemuo who runs Sam Steel clinic in the same Rumuokoro area had to be going to treat the patient at the hotel.

“From what we have gathered so far, Dr. Enemuo, knowing full well that Koye was positive of the Ebola virus took some measure of precaution to protect himself while treating Koye. Knowing the enormity of what he was doing, Dr. Enemuo upon Koye’s departure for Lagos poured bleach all over the room that Koye slept in order to sanitise the place”.

But the doctor, a nice and conscientious professional, suspected that Dr. Enemuo was either hiding something or was suffering from a strange ailment because he proved negative to malaria, fever and typhoid fever. To be sure of what he was doing, he spoke to other very experienced doctors about the strange case he was handling in his hospital.”

“He even invited some of his colleagues to come over to his hospital to study Dr. Enemuo’s medical history. Of course, the news of the Ebola virus was everywhere, so, they were afraid to go. None of them showed up at the hospital where Dr. Enemuo was being treated. His condition continued to deteriorate and he eventually died and his body was taken to the University of Port Harcourt Teaching Hospital.